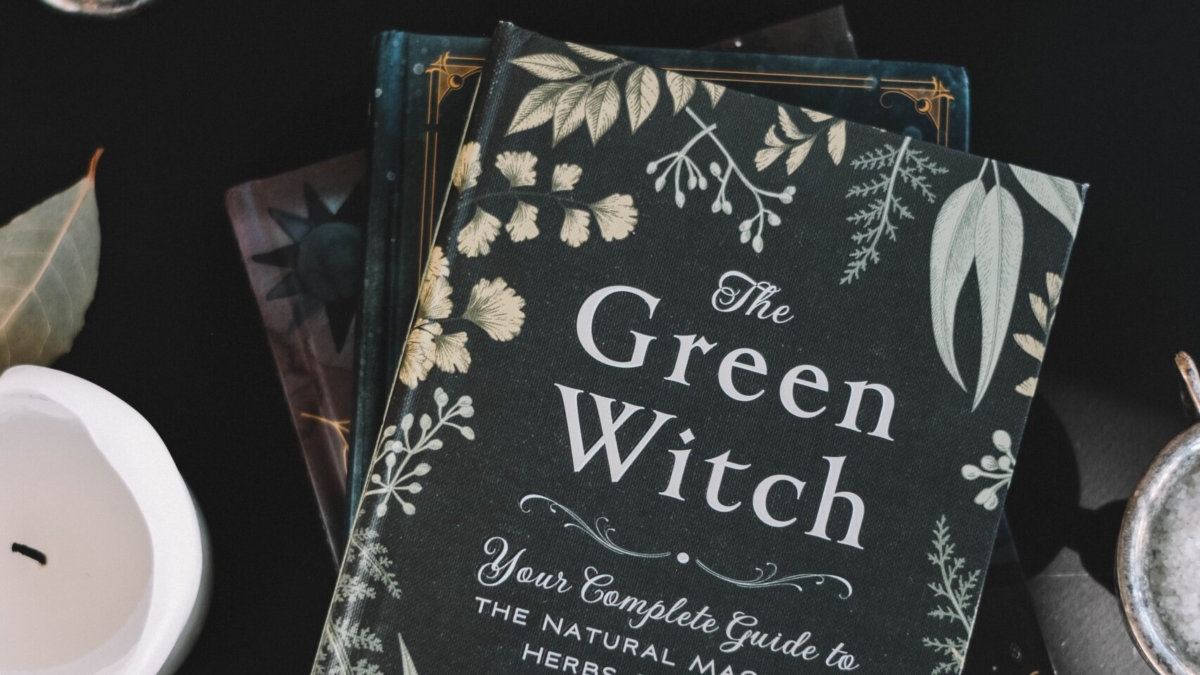 Whereas alternative religions promote the idea that humanity is a steward or custodian of the planet, the green witch understands that she is the manifestation of the earth itself, not merely a caretaker. That close sense of identification allows her to work in partnership with the Earth’s energies.

The Witchcraft industry now contributes to contamination, pollution, and other nasty effects of mass-produced goods. This has brought about a slew of problems with environmental implications. As most witches revere nature, this is not a pleasant piece of news. Witchcraft is about being true to yourself and your values. How can you be true to what you believe if, in order to practice witchcraft, you feel like you have to buy certain objects that damage nature?

Overconsumption is not the only issue to watch out for (although, of course, it is something to keep a close eye on). As a witch or a spiritual person, there are plenty of things you can do to help the Earth recover from the excesses of society. If you truly love nature, then, we’re sure some of our suggestions will resonate with you and you’ll integrate them into your practice.

1. Reevaluate the material your spell jars are made of

Toilet paper rolls take one to three years to decompose and it is also compostable. On the other hand, it is estimated that glass takes around one million years to decompose – and, of course, you can’t compost it. You can carefully bend toilet paper roll to make it into a container that you can fill with whatever you want and then close by bending the other end. We recommend you adopt the practice of making spell jars, especially those you intend to bury, with toilet paper roll. If it’s a jar you intend to keep for a long time, like a ward, then you may use glass, which is still better than plastic. Reusing plastic for jars that you intend to keep, as long as you cleanse the jar thoroughly, can be a good idea. This is so because it’s better to give it a purpose than to toss it away, though.

2. Only buy stuff you need

This is a tip that is budget-conscious, eco-friendly, and aligned with spirit as well. It can be very tempting to spend hundreds of dollars on pretty crystals and expensive witchcraft supplies. However, think through your purchases before making them. Do you really need a certain item or can you replace it with something you have at home? Check your spice cabinet and your current collection of witchy tools. Consider whether you will have time to devote to the object so you’ll get the most out of it. A lot of witchy tools like crystals, oracle decks and herbs require you to invest time and energy on them for you to get the most out of them. Be realistic about how much time you can invest on your practice and whether a new item fits in your schedule. It may be a good idea to wait until you have experienced the full potential of the items you already have before you go out and get new ones. Limiting your purchases reduces the emissions of CO2 from factories. It also reduces the strain on natural resources needed to produce the item. Which drives us to our next point…

3. Refrain from buying herbs that are being overharvested and/or endangered

Not only is White Sage a closed practice, it is also being overharvested because of its recent surge in popularity. A subspecies of palo santo, Bulnesia sarmientoi, which is native to the Gran Chaco area in South America, is in danger of extinction. If you’re going to enjoy some palo santo, make sure it’s another subspecies. Some other plants in a critical state of conservation include orchids, coffee, and jade vine. Check what other species are in danger of extinction here.

This piece of advice can be applied to many categories of items. Buy from local small businesses to support your local economy. Do some research as to what crystals and herbs are native to your area. Crystals and herbs that are native to the area where you live will always be more effective than imported ones. They tend to appear in areas where the energy of the collective needs them most. This happened shortly after Argentina’s Dirty War. During this civil war, the government of Argentina persecuted, tortured and murdered thousands of people who didn’t share their political ideology. Rhodochrosite, the stone for tolerating people who think differently from us, was discovered shortly after this period in 1992.

If you buy from local businesses and avoid acquiring imported items, you’ll reduce the negative ecological impact that transporting goods entails. You will also bring about positive effects to your community, both by supporting local entrepreneurs and making use of what wise nature has decided to place near your community.

5. Clean up a nearby park or forest as an offering

If you work with a Deity with close ties to nature such as Aja, Xochiquetzal, the Pachamama, Asintmah, Loco, Bhumi, Dangun, Ostara, Apollo, Artemis, Demeter, or Dyonisus, they will appreciate your effort to make your most immediate patch of green cleaner. Even if you just want to honor nature in some way, this is a great idea. Make sure to use protective gear and dispose of as much clutter as you can. This is a mundane act with enormous spiritual implications.

If you want to contribute to an environmental scientist or engineer having an epiphany that will be beneficial for Mother Earth as a whole, you can try casting a Clarity Spell for them. You can also them Reiki so their chakras are always balanced and they are prepared to channel some Divine wisdom and translate it into the magical language of science.

A simple Clarity Spell consists of casting a protective circle and invoking a Deity or the Guardians of the Elements. Then, cleanse a white candle and set it with intention by exhaling on it while concentrating on your intention. Carve “scientists that look after the wellbeing of planet earth” on the candle using either your Athame or the back of a match. You can also carve protective runes or sigils. You can include herbs for clarity such as honeysuckle, hazel, lily of the valley, bay leaves, and caraway, as well as crystals for wisdom such as Clear Quartz and Fluorite. Light the candle and either snap your fingers three times or ring a bell. Say “I send mental clarity and Divine guidance and wisdom to those scientists and engineers that look after the wellbeing of Mother Earth and who are willing and ready to receive this energy.” Once the candle burns away, release the Deity or Deities you have called upon for this spell and the protective circle.

7. Refrain from buying items like non-biodegradable glitter or synthetic resin

Non-biodegradable glitter and resin, among other items made of plastic, serve no essential function in spellwork. Some brands make biodegradable glitter. If you absolutely must include glitter in your hexes, as has become fashionable in WitchTok, check that the brand that you’re buying produces biodegradable glitter. Synthetic resin production, on the other hand, requires the use of fossil fuels, emits toxic chemicals, and produces hazardous waste. So double check before buying that Orgonite!

8. Start a composting practice as an offering

Deities like Dionysus or Artemis will really appreciate you going out of your way to compost your residues. Even if you just want to show your commitment to Nature to any spirit that aids you, this is a great idea. Like cleaning up a green communal space, this is an example of how a mundane activity like composting can have a profound spiritual meaning.

Mother Earth needs as much healing energy as it can get. If you practice Reiki, make it a point to regularly send Reiki to planet Earth. You can do this by imagining a small Earth sphere that fits in between your hands and sending your energy all over it. The color green is preferred. You can use an object of a similar size and shape to represent Planet Earth as well.

10. Start your own garden

Starting your own garden, even if you just plant some tomatoes, is great both for your practice and the planet. It will help you be in tune with the cycles and the seasons, for once. You will also get food and spell ingredients that really know your life and your energy. You’ll know that these are safe to eat and use for spellwork as they have been planted, cared for and harvested ethically – after all, you’ve done it yourself. The fact that these are literally things you reap from the Earth is also very powerful and can be used symbolically in spells. You will also place less of a strain on the energy waste that transporting groceries entails. If you don’t have a backyard, you can look into options like hydroponic gardens.

11. Plant a tree after a spell works in your favor

If your Deities have recently given you lots of wealth and abundance, or if a spell that felt like a long shot ended up working in your favor, there’s no better way to say thank you than to plant a tree. Choose a local species. You can even do some research on the properties of different local trees and choose one that you think your community needs. This is also a great idea as part of a prosperity spell. We recommend planting it yourself, as it will make the activity far more personal and powerful. But there are non-profits that will do it for you if you donate, such as One Tree Planted in the US, Earth Watch in the UK, and One Tree Planted Australia.

This is a great option if you don’t have a green thumb or if a disability prevents you from more physical activities. Choose your favorite social media platform, spend some time doing quality research on your favorite environmental topic, and create engaging content about the research you’ve done.

How is this spiritual? Well, it’s a way to show the Divine that you put your money where your mouth is. The Spirit world does appreciate action over paying lip service to a cause. You can show the Divine where your values lie by simple actions like this, and you’ll be rewarded accordingly.

13. Scatter Some of the Ashes From Your Spellwork Into the Soil

The ashes left over from your spellwork are powerful. They are infused with your intent and your power, as well as the power of the spirits and Deities that work with you. Scattering some of these ashes with the intent that they may transmit healing energies to the Earth is a great (and easy!) way to give back to Mother Earth.

How do you honor the planet in your practice? Do you have a tip that we have not mentioned? Share it in the comments!

“Is Resin Bad for the Environment?” Conserve Energy Future.