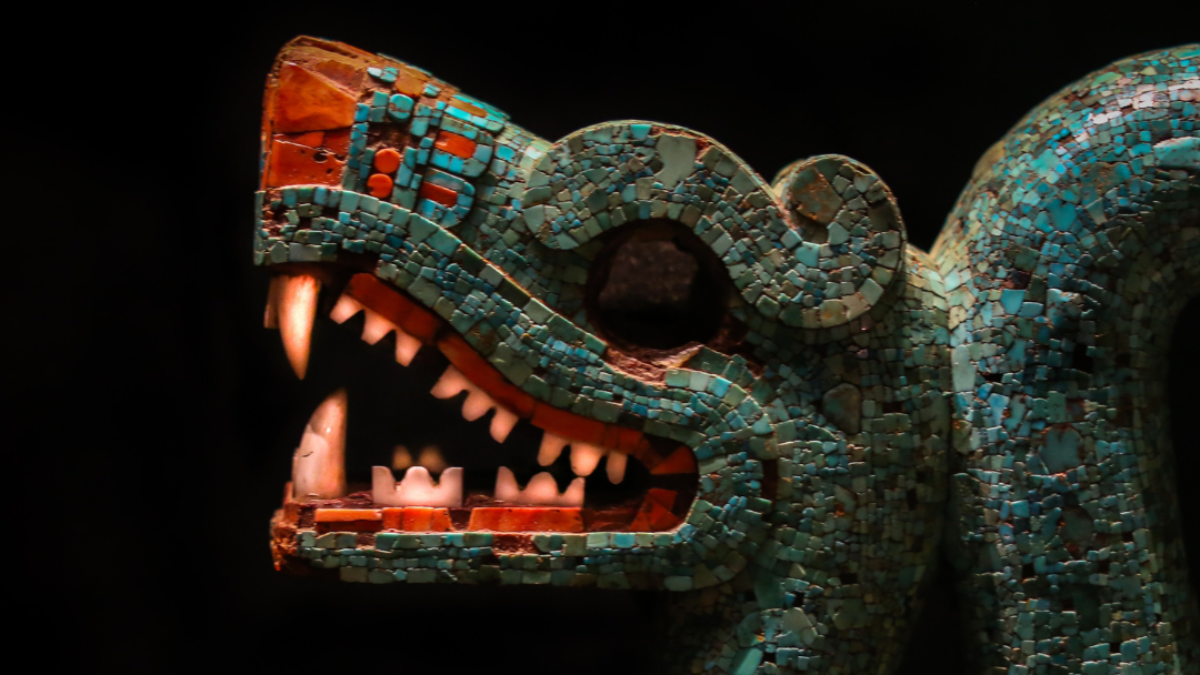 by Verene Snopek
with no comment
discover the deitymythology

With Mother’s Day coming up, we wanted to delve into the history of a deity associated with maternity, fertility, and childbirth. In this article, we will describe Coatlicue, one of the main deities in the Aztec Pantheon. Her name is pronounced “koh-at-LEE-kway.” Besides being a motherly figure, she was also very fierce and is closely related to warfare and governance.

It is important to note that there is no unifying myth in ancient Aztec mythology. This is why there are many versions of Coatlicue’s deeds. Some of these versions are contradictory or confusing. However, we have selected the myths that, in my opinion, are more representative of Coatlicue’s spirit. These myths also explain why she was so important in the Aztec religion.

Coatlicue, whose name translates roughly to “Serpent Skirt”, is one of the major deities in the Aztec Pantheon. She was also called Teteoinnan (“Mother of the Gods”) and Toci (“Our Grandmother”). Coatlicue is an earth-mother goddess, and she is often depicted as an old, wise woman.

Coatlicue belonged to a class of deities known as tzitzimime, who were gods and goddesses related to the stars. They were considered terrifying and dangerous. Aztecs believed that, at any given moment, the tzitzimime could descend to the earth’s surface. They could eat people, and some had the power to devour the whole earth. Some sources call them demons or devils.

However, the tzitzimime, like Coatlicue herself, also had positive associations. These deities were patrons of midwives. People also invoked them for medical help and they had issues with fertility. Coatlicue, like the other deities, was both respected and feared.

The most well-known statue of Coatlicue is one of the scariest figures in Aztec art. Historians say that this statue was actually found in the year 1790 in an area of Mexico City. Yet, it was so frightening that it was immediately reburied.

This famous Coatlicue statue is 11.5 feet (3.5 m) tall and almost 5 feet (1.5m) wide. The figure depicts the goddess in her most fearsome form: her head is severed and it has been replaced by two coral snakes. In Aztec culture, snakes symbolize fertility. Coatlicue is wearing a necklace of severed human hearts and hands. She is also adorned with a large skull pendant and a skirt of intertwined snakes. Her hands and her feet have large claws. She uses them to rip human corpses apart before she eats them.

The statue also shows Coatlicue’s breasts and stomach to indicate that she is a mother and has nourished many.

Coatlicue’s hair falls down in 13 tresses. This symbolizes the 13 heavens of the Aztec religion, as well as the 13 months of the year. The base of the statue was not meant to be seen, but it was carved anyway. It depicts an earth monster.

The Aztecs believed that, before our world was created, there were other previous four worlds. In each world, the god or goddess who created it had to make a sacrifice and turn him/herself into the sun, which enabled life on that planet. By turning themselves into the sun, the gods and goddesses made sure that they would be the supreme ruler of that world.

The second world was created by Quetzalcoatl, and it was full of a race similar to humans. Tezcatlipoca destroyed this second world and the beings that lived there became monkeys.

The third world began with the actions of Tlaloc (“He Who Makes Things Sprout”), God of Rain. Quetzalcoatl was jealous of Tlaloc for being the supreme ruler of this third world, so Quetzalcoatl flooded the Earth. People who survived the floods were turned into birds.

The fourth world was the product of Tlaloc’s wife, Chalchiuhtlicue (“Jade Skirt”). She is the Goddess of Water, Rivers, Streams, and Storms. However, another flood destroyed this world, and the people who survived became fish.

Finally, several gods and goddesses created a fifth world. Legend says that, in this new world, there was only water. Tlaltecuhtli, a monster goddess, was the only living being below this water. Tlaltecuhtli’s name means “Earth Lord”, even though it is a feminine deity. She is represented as a monster with numerous mouths filled with sharp teeth, and she ate anything in her path.  In many sources, Coatlicue is the daughter of Tlaltecuhtli.

In order to create a world that could support life, Quetzalcoatl and Tezcatlipoca fought Tlaltecuhtli. They broke the monster’s body in two. The top half of her body became the earth. Her bottom half was tossed into the air and became the heavens. Her hair became trees, herbs, and flowers. Her skin became grass. Her eyes and mouths were turned into caves, wells, rivers, and fountains. Mountains were created from her shoulders.

Legend says that Tlaltecuhtli demands human sacrifice. This is the only way in which she will continue to produce the natural resources that all humans need. This is why Aztecs sacrificed human lives in their rituals.

After the creation of the fifth world, several female deities, including Coatlicue, sacrificed themselves. In this way, they allowed time to be put in motion. Life could now exist on this new Earth.

After this moment, these female deities were symbolized by their skirts, which might explain Coatlicue’s name. This myth might also explain why her statue depicts two snakes rising from her severed neck. With her selfless sacrifice, Coatlicue enabled life to continue. This explains why she is associated with fertility and why she is one of the most important deities in the Aztec pantheon.

Coatlicue and the Creation of the Moon and the Stars

A widespread myth explains that Coatlicue was in charge of the shrine in the temple on top of the sacred mountain Coatepec, which means “Snake Mountain”.

One day, a ball of feathers descended from the heavens while she was sweeping. She took the ball of feathers in her hands and she held it close to her belt. This caused her to become pregnant.

Coatlicue already had a husband, the hunter-god Mixcoatl (“Cloud Serpent”). They had many children together. One of them was the powerful goddess Coyolxauhqui, whose name means “Painted with Bells”. Coatlicue and Mixcoatl were also the parents of the Centzon Huitznaua (“four hundred Southerners”). Coatlicue had another daughter, whose name is Malinalxochitl (“Wild Grass Flower”). She is the goddess of witchcraft and scorpions, and she is the daughter of Coatlicue with Cozcaquauh, the king of Cohuatlicán. Malinalxochitl, however, is not present in this myth.

When Coyolxauhqui and her 400 brothers, the Centzon Huitznaua, found out that Coatlicue was pregnant, they asked her who the father was. As she was not able to provide an answer, Coyolxauhqui was enraged.

The plan, however, was thwarted when one of the Centzon Huitznaua told Coatlicue’s unborn son about the murderous plot. The child that Coatlicue was carrying turned out to be no other than Huitzilopochtli (“Hummingbird of the Left”), a fierce god. Huitzilopochtli had been communicating with Coatlicue from inside the womb. He had been telling her that everything would be alright.

When Coatlicue sensed that it was time for her to give birth, she climbed to the top of Coatepec mountain. Her children followed her to the summit but arrived only after Huitzilopochtli had already been born.

This god was born fully grown and in invincible armor. He was also carrying his formidable weapon, named xiuhcoatl, which means ‘Fire Serpent’. The sword was actually a ray of the sun because Huitzilopochtli is one of the gods associated with the Sun.

Huitzilopochtli went to his mother and said, “I will make it so that you can see your daughter’s face every night.” He took Coyolxauhqui’s head and threw it into the heavens. The head of the goddess became the Moon. Huitzilopochtli then attacked the Centzon Huitznahua. He killed many of them, which became stars in the sky, next to their sister, the Moon.

For the next forty years, Huitzilopochtli and the Aztecs wandered through the wilderness. At one point, Huitzilopochtli disappeared. One night, one Aztec priest had a dream in which Huitzilopochtli told him to look for a symbol: an eagle sitting on a cactus while holding a snake in its beak. After a while, the Aztecs saw the eagle, they settled in that area, and they named that area Tenochtitlan.

In another myth, Coatlicue warned the Aztecs of their future demise. During the rule of Moctezuma I, 60 sorcerers were sent to visit Coatlicue in Aztlán. Aztlán was the mythical ancestral home of the Aztecs – but it hasn’t been found by archeologists yet. The purpose of this visit was for the sorcerers to gain ancestral knowledge. Coatlicue was on top of a hill, and the sorcerers were unable to reach her because they were bearing too many gifts.

When they finally arrived at the top, they found Coatlicue crying because of Huitzilopochtli’s departure. She reprimanded the sorcerers and warned them that they had grown too heavy from all their rich foods and beautiful clothing. After that, she uttered her prophecy: all Aztec cities would one day fall. Only then would Huitzilopochtli, her son, return.

In summary, Coatlicue was one of the most important deities in Aztec mythology. This is because she was the mother of the Aztec patron deity, Huitzilopochtli. At the same time, Coatlicue also gave birth to the Moon (the goddess Coyolxauhqui) and the stars (the Centzon Huitznahua). Coatlicue’s other daughter, Malinalxochitl, was also an important goddess associated with witchcraft.

Among the Aztec people, Coatlicue was both respected and feared. People asked for her help with pregnancy, birth, and medical conditions. At the same time, the Aztecs thought that she could come to earth and devour humans. So, Coatlicue’s nature is dual and very complex, as are many of the gods and goddesses of Aztec mythology.

Did you enjoy the article? Had you heard about Coatlicue before? Tell us in the comments!

Verene Snopek is a Content Writer at Aquamarine Content. She is a Cancer Sun, Gemini Moon, and Libra Rising. A Jane of all trades, she is a certified clinical psychologist specializing in CBT and DBT. This cat lover also works as a professor of History, Literature, and Ethics in a Teacher Training College. She is interested in past lives and energy healing and has been learning about Astrology and Tarot reading for over a year. Her favorite crystal is Amethyst and her favorite Tarot card is The Lovers.