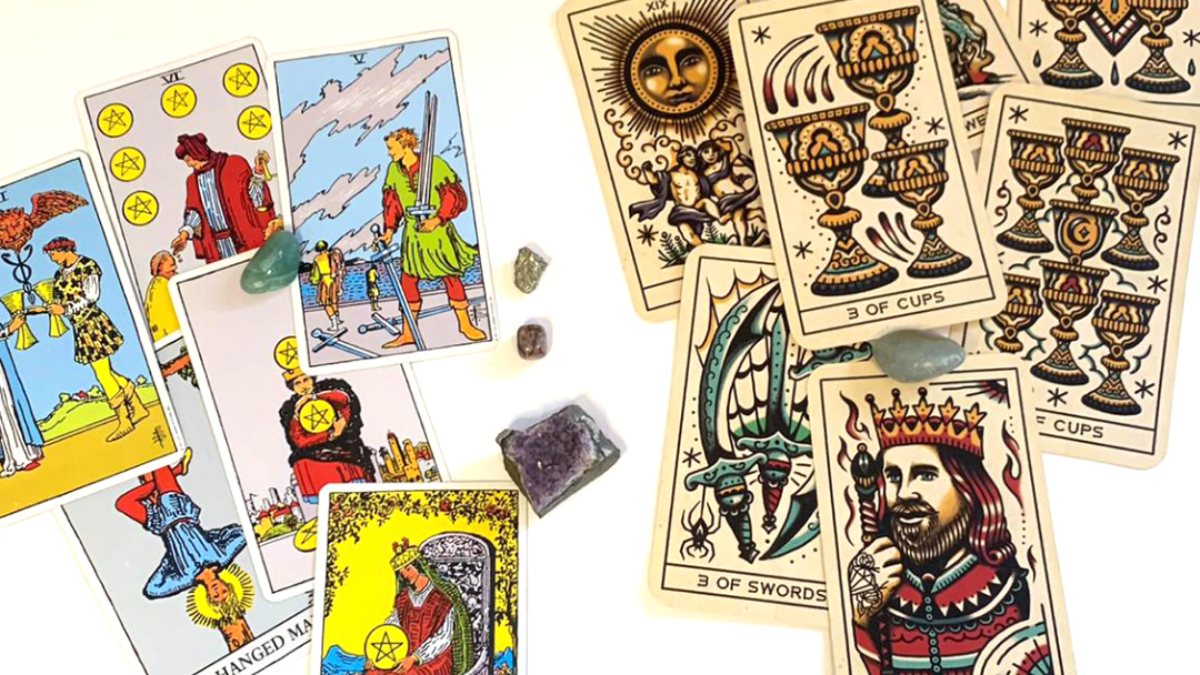 by Virginia Castiglione
with 3 comments
tarot

In the English-speaking world, Rider-Waite Smith reigns supreme. Nine cases out of ten, a Tarot reader uses a version of this deck and/or learns to read Tarot with this deck. However, this isn’t the case in the French-speaking world. There, the preferred alternative for most Tarot readers is the Tarot de Marseille. Here in Argentina, both decks coexist with almost equal popularity. A question a lot of beginner Tarot readers face is which deck to choose among these two options.

The History of the Decks

Up to a certain historical point, both decks share a history. The Tarot as we know it today emerged as a game in Northern Italy in the 15th century. Its ancestors are possibly located in the Middle East. The original name of the Triumphs, a word that used to refer to the Major Arcana, comes from the Arabic word taruq, which means “way.” This could have a connection to the philosophy that the four suits in the Tarot represent four different ways of achieving a goal. However, the philosophy behind the origins of Tarot remains a bit of a mystery.

Tarot decks have influences from Medieval art, especially its symbolism laden with meaning. They also owe an influence to Petrarch and the allegorical parades that were typical of the time. They reflect Christian, Islamic, and astrological ideas that people turned to for finding meaning in life.

The Rider-Waite Smith Tarot is sometimes referred to as Rider-Waite. This erases the key contribution of its illustrator. It was created in England by Arthur Edward Waite and Pamela Colman Smith in the late 19th century. Waite was a connoisseur and writer of the occult and member of the Golden Dawn Hermetic order. This order was one of the first to accept women. Pamela Colman Smith was a woman of color born in Great Britain to an American father and a Jamaican mother. She had various interests. After a stint studying Art in the Pratt Institute in New York City, she became a commercial illustrator in London. She illustrated a volume of the poet Yeats, and it was Yeats who induced her into the Golden Dawn Hermetic Order. There, she and Waite met.

Waite was intrigued by the Sola-Busca Tarot, an old Italian deck whose black and white photos were acquired by the British Museum in 1908. This was the first deck to illustrate all Tarot cards equally, including the “pips.” The “pips” traditionally only depicted the suit and the number. His fascination with the Sola-Busca Tarot drove Waite to write a set of instructions and commission a Tarot deck from Smith. It took her only six months to complete the task. She had complete creative freedom when it came to the Minor Arcana. Pamela Colman Smith was believed to have “a second sight.” It is believed she painted some visions she had while she listened to music.

The deck was published by the Rider Company in England in 1909. It was made popular in the United States by a businessman by the name of Kaplan around fifty years later.

However, what are the differences between these decks? How can these differences impact your learning process and the way you read? Stick around, we’re about to go into detail about that.

Major Difference #1: The Minor Arcana are illustrated in detail in the Rider-Waite Smith Tarot

This may be the main difference when considering which of these two decks to get. The Minor Arcana in the Rider-Waite Smith deck have detailed illustrations. They feature little self-contained situations or stories, mostly featuring human characters. This makes it really accessible for beginners. This is so because you can tell the meaning of each card intuitively, just by looking at each card.

In contrast, while the Major Arcana in both decks have similar illustrations, the Minor Arcana simply features the suit and the number in the Tarot de Marseille. This can make it harder for beginners to read. This is so because you are required to know about the four elements represented by the suits (Fire, Water, Earth, and Air) and numerology.

You’d use this knowledge to establish relationships between the meaning of the elements and the number depicted on any given card. For example, the Ace of Wands combines the numerology of 1 with the element of Fire. This makes it about a beginning (numerology of 1) that involves passion and creativity (the meaning of the element of Fire). Even though most people, especially beginners, will find this a huge turnoff, the lovers of the Tarot de Marseille love this about the deck. This is so because they are not limited by the scenarios depicted in the Rider-Waite Smith. These scenarios can influence your reading even subconsciously. Without any people or situations involved, you can adapt the numerology and the elements to any situation. This is a far more abstract depiction that opens up the possibilities for your readings.

In these two decks, the Major Arcana Strength and Justice have different numbers. This has different implications for the numerology of each card. In the Tarot de Marseille, Justice is number 8 and Strength is number 11. On the other hand, in the Rider-Waite Smith, this is switched – Strength is the 8th Major Arcana and Justice is the 11th. In numerology, 8 is the number of balance and karma. It has a materialistic side to it. Some people who embody the energy of 8 can be narrow-minded and overly concerned with wealth. 11, on the other hand, is a Master Number in numerology. 11 is not at all concerned with the material, being absorbed by spiritual matters instead. 11 is a number of imagination and being the center of attention.

In the Tarot de Marseille, Justice is all about balance. The card may be understood to be extremely concerned with the material world and restoring the balance in disputes over assets and money. The opposite would be true for Justice in Rider-Waite Smith. In this deck, it would be unconcerned with the material world and would be more about the spiritual side of Justice – Divine Justice, if you may. Strength, on the other hand, is all about spiritual strength in Tarot de Marseille. In Rider-Waite Smith, it is the persistence and toughness that is focused on the material world. In this deck, it could also turn into narrow-mindedness.

In some interpretations of the Tarot de Marseille, the 13th Major Arcana (Death) has no name. The reason why it has no name remains a mystery. It’s probably tied to the taboo nature of giving death a name or speaking its name out loud. This quirk may mean nothing to you, or you may find it intriguing and fascinating.

Major Difference #4: We know a lot about the origins of Rider-Waite Smith, not so much about the Tarot de Marseille

As you have observed in the previous paragraphs, we know who the creators of the Rider-Waite Smith are. We know a lot of biographical info about them. We know that Pamela Colman Smith fought for women’s right to vote and wrote books about Jamaican folklore. We know that Waite and young Aleister Crowley had a bit of a feud going on. In contrast, the origins of the Tarot de Marseille are shrouded in mystery. For all we know, it could not even have its origins in Marseilles. The implications of this? Honestly, that is up to personal taste. Do you want to know about the creators of the deck you’re using, or not?

Major Difference #5: The Coins vs the Pentacles

Another difference between these decks is the name given to one of the suits. The suit representing Earth in Rider-Waite Smith is called Pentacles. The same suit is called Coins in the Tarot de Marseille. They both depict currency in its metal form. However, the Pentacle is a sacred symbol for Wiccans and other traditions. It is believed to have protective powers. The name Coins is more general. Pentacles are coins sometimes, but not all coins are pentacles. Pentacles may mean a lot to you and you may really want them mentioned on your deck. Plus, the protective qualities of Earth are highlighted by this name. We’re talking about the classic version of the decks here. Various reinterpretations of both decks take plenty of liberties when it comes to the names given to the suits.

At the end of the day…

It’s all up to personal preference and what your soul is calling you to do. None of the differences between these decks make one deck objectively superior to the other. The knowledge that you need to read using one deck is pretty interchangeable with the other, so your choice doesn’t have to be final, either.

Which Tarot deck do you prefer? Why? Tell us in the comments!

Costa, Marianne. The Way of Tarot.